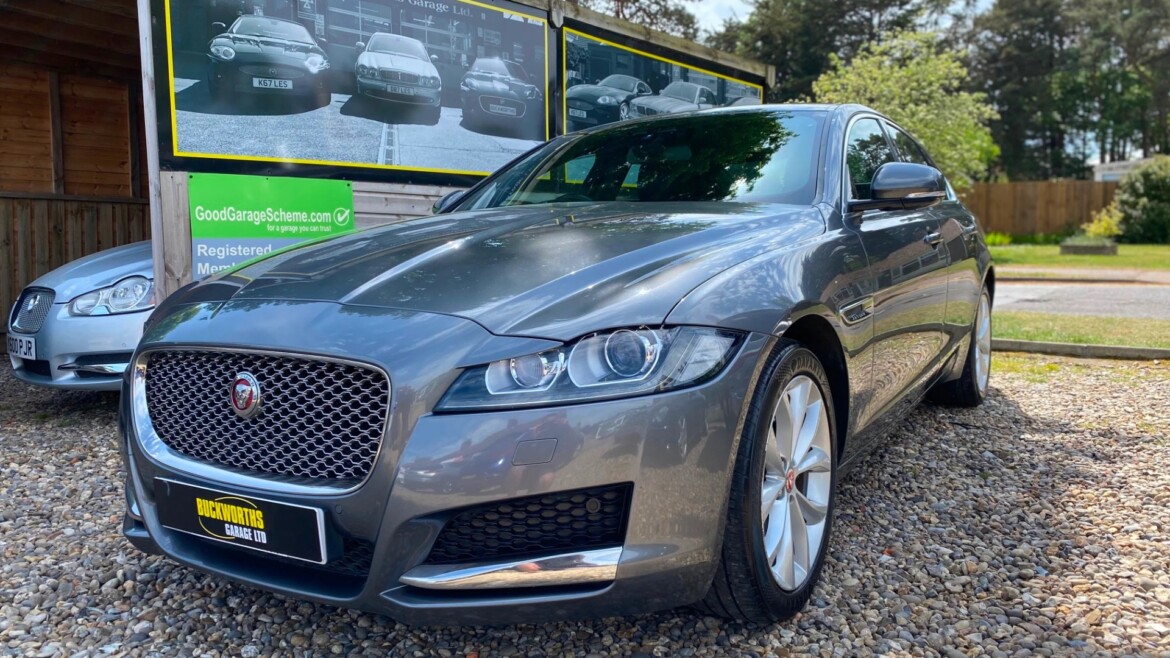 The first generation Jaguar XF was unveiled at the 2007 Frankfurt Motor Show. It was a replacement for the S-Type, a car which was dated and from an era Jaguar was trying to distance itself from. The XF signalled an all-new design direction, which would be a turning-point for Jaguar.

Designed by Ian Callum – the man responsible for designing the achingly beautiful F-Type – the Jaguar XF 2017 also had a modern interior, featuring swivelling dials and a central gearshift dial, which was all very advanced for 2007.

Jaguar released an equally stunning estate version of the Jaguar XF in 2012 – the Sportbrake. The same year, Jaguar announced it was making an even faster version of its XFR flagship model. The XFR-S, available in both saloon and estate guise, had 542bhp and was capable of a 0-60 time of just 4.4 seconds.

In 2015, the second generation of the Jaguar XF was launched. Heavily based on the smaller XE, it is still quite hard to distinguish the two cars on looks alone.

The XF represents good value for money used too. There are plenty of early 2008-9 cars available with the 2.7-litre diesel engine for under the £10,000 mark. However, we would recommend the later 2.2-diesel engine which is much better on fuel and doesn’t compromise on performance too much.

2012 examples with around the 50,000 miles can be picked it from around £12,500 which represents exceptional value for money, and would make a great used purchase. The only two things we would advise avoiding are those cars with 17-inch wheels and that don’t have full leather seats.

The XF is undisputedly a stunning looking vehicle, which has helped Jaguar escape from the ‘old-man’ image it always struggled with in the past. Put simply, you will no longer receive eye-rolls when you say you own a Jaguar. The first problem for Jaguar was adjusting the XE chassis to the size of the XF, a move that ultimately shaped its proportions and extremely similar stance to the XE – no bad thing.

The new XF also unmistakably features design cues from the F-Type, particularly at the rear. The first-generation XF was a good-looking car, but the latest model has certainly moved the game forward even more in terms of design.

The interior is also a great place to be, both in terms of comfort and to look at. The XF also features a great eight-inch display as standard, which can also be upgraded to a 10.2-inch screen. The thing you will notice if you are familiar with the Jaguar brand is just how similar the interior is to the XE and XJ.

Jaguar gets the balance just right between agility and comfort. While the XF may not quite have the dynamic capability of a 5-Series, it is still a good car to drive. For those wanting adaptive suspension, Jaguar’s Adaptive Dynamics is only available on certain models, so it is definitely worth trying the car with and without the suspension to work out if you think it is worth paying the premium, all depending on personal suspension preferences.